“Mozart has caught human soul into his music and grand music has an indescribebly great influence. People were often enchanted at his concerts and many were so touched that they cried. It has not changed with centuries, also today the audience is deeply touched by his music. I have great honour to bring Mozart’s music to the listeners and also be part of it.”

In the second half of the concert the music of one of the greatest symphonic composers of the 20th century will be performed – Dmitri Shostakovich’s Symphony No 8 which was written during the Second World War. 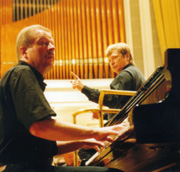