OPENING CONCERT OF THE SEASON

Eldar Nebolsin, born to pianist parents in Tashkent, the capital of Uzbekistan, is at present living in Spain. He is an acclaimed pianist who regularly gives concerts at famous concert venues all over the world. His international career was launched at the age of 18 when his winning of the 11th Santander International Piano Competition brought along engagements with over 130 chamber and symphony orchestras. One of his last accomplishments was the First Prize at the First edition of the Richter International Piano Competition in 2005. Conductor Yuri Termikanov, a jury member of the competition, called Nebolsin a top-class piano virtuoso.
At the opening concert of the season Eldar Nebolsin will perform the Piano Concerto No 1 by one of his favourite composers, Sergei Rachmaninov.
ERSO will open its’ jubilee season 2006/2007 with Heino Eller’s symphonic poem Koit (Dawn) and Dmitri Shostakovich’ Symphony No 6 which celebrates the end of his 100th birth anniversary. 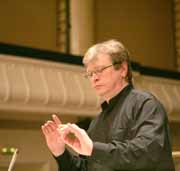