In 1906 a professional theatre, based on the song and drama society Estonia, was founded in Tallinn on the initiative of directors and actors Paul Pinna and Theodor Altermann. The theatre was named the Estonian National Opera in 1998. Therefore, ERSO is honouring the Estonian National Opera’s 100th anniversary with a gala concert. Since the very beginning ERSO has collaborated closely with the Opera orchestra as at first being a very small orchestra, it was necessary to borrow musicians from the Opera for giving symphony concerts, and the two orchestras also used to share conductors.
The concert is conducted by Neeme Järvi, who was the principal conductor and artistic director of the Estonian National Opera in 1963-1975.
“I was the principal conductor of the Estonia Theatre for 13 years, at the same time also the principal conductor of ERSO. These were interesting times. There were good singers and an interesting repertoire. Eino Tamberg’s music was constantly played at the Estonia Theatre and Raudne kodu (Iron Home) was written especially for the theatre and recorded for the record label Melodya. I remember the performance of Verdi’s Requiem as extraordinary as it was a co-operation between two organisations at the Estonia Concert Hall. I will never forget the memories of exceptional singers and colleagues.
I decided to compile the programme of intermezzos and uncommon symphonic passages from popular operas. I hope that we will have an interesting meeting with ERSO after such a long time.”
Neeme Järvi
An attractive guest performer Gerli Padar is actually a well-known singer in the field of jazz and rock music, and musicals. 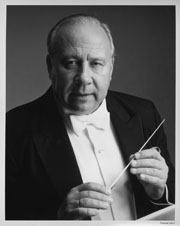