Sir Neville Marriner is one of the most famous and sought-after conductors in the world. He started his musical career as a violinist and was a member of most of the London orchestras, incl. 12 years at the prestigious London Symphony Orchestra. He became known as a conductor when he started to perform with the chamber orchestra Academy of St Martin in the Fields, he was the founder and artistic director of it. Sir Neville Marriner has been the leader of the Los Angeles Chamber Orchestra, Minnesota Orchestra, Stuttgart Radio Symphony Orchestra, the guest conductor of Dresden Staatskapelle and Amsterdam Concertgebouw Orchestra and in addition he has conducted many other world renowned orchestras. He has made over 600 recordings, most of it with the orchestra Academy of St Martin in the Fields with whom he also recorded Mozart’s music for Miloš Forman’s movie Amadeus that was awarded eight Oscars. He was awarded CBE in 1979 and knighted in 1985 for his service in music.
His son Andrew Marriner enjoys an active career of a clarinet player, both as a soloist and chamber musician, he is also the principal clarinetist of the London Symphony Orchestra. He collaborates regularly with his father and his orchestra Academy of St Martin in the Fields and with many other noted musicians. 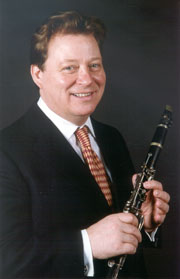