ERSO AND EESTI KONTSERT’S FINAL CONCERT OF THE SEASON

Mahler – Symphony No 8 in E-flat major

The symphony where the philosophical, aesthetical and ethical pursuits of the composer have found their final and conclusive solution, is also called the Symphony of a Thousand, due to the large number of participants in the premiere on 12 September, 1910, in Munich (there were 1030 performers); the composer himself conducted it. Eight vocal soloists, boys’ choir, two mixed choirs, brass band back stage and a large orchestra participate in the performance of the symphony.
On 18 August, 1906, Mahler wrote to the Dutch conductor Willem Mengelberg: " I have just completed my Eighth! It is the most remarkable composition I have written so far. So individual in content and form that it is impossible to describe it in the letter. Imagine that the whole universe begins to sound and ring. The result is not merely human voices singing but planets and suns joining in as well.”
The symphony has been performed only once before in Estonia, it was conducted by Arvo Volmer in 1996. 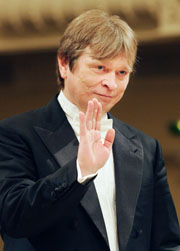