It has become a good tradition for ERSO and the Symphony Orchestra of the Estonian Academy of Music and Theatre to play concerts together in order to give Academy students the opportunity to work next to experienced orchestra players. Last project of this kind was almost two years ago when Mahler’s 3rd Symphony was performed together. Now Paul Mägi, conductor of the Academy orchestra conducts one of Anton Burckner’s most popular works, Symphony No 4 the Romantic from 1874, and Bent Lorentzen’s (b 1935 in Denmark) Double Concerto for trumpet and trombone, featuring ERSO’s principal brass players, professors at the Estonian Academy of Music and Theatre: Indrek Vau and Andres Kontus. 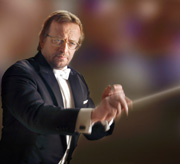