ALEXANDRE KNIAZEV ON CELLO AND ORGAN

Alexandre Kniazev, who has been called the successor of Mstislav Rostropovich, is, in addition to playing the cello, an excellent organist. As a rare occasion, the audience will see one soloist performing on two instruments. Alexandre Kniazev’s high-flying international career as a soloist and chamber musician has lasted for nearly 30 years and brought him victories at competitions (e.g. the 1st prize at Trapani International Chamber Music Competition in 1987, the 2nd prize at Tchaikovsky Competition in Moscow, 1990) as well as prestigious awards for recordings. Together with the pianist Boris Berezovsky and the violinist Dmitri Makhtin he often performs at chamber concerts; he is also a professor at Moscow Conservatory.

Along with Joseph Haydn’s music, the concert includes Arthur Honegger’s Third Symphony written in the final year of World War II. “I wanted to express the humankind’s fear of God’s wrath, the feelings of the persecuted generations who have been left to their fate. My symphony is a drama with three characters – Sorrow, Happiness and Man.” 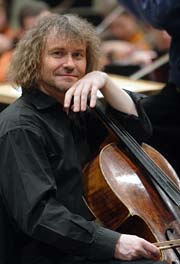