The premiere of Helena Tulve’s extinction des choses vues by ERSO and Olari Elts took place at NYYD-Festival in 2007. “The piece is based on Michel de Certeau’s text Extase blanche, a discussion on vision and the extinction of what has been seen. There is an awful lot to see or rather to hear in Tulve’s work. Tulve engulfs and governs the orchestra so that the sound is dense but not overloaded. Olari Elts, however, precisely outlines the nuances with his angular gestures on the thankful material of ERSO.” (Tui Hirv). “Thanks to its quality performance, an extremely impressive piece!” (Igor Garshnek)

Eino Tamberg’s Concerto grosso with its neoclassicist features is one of the highlights of Estonian music of the post-Stalinist era. In 1957 the Concerto grosso won the first prize and golden medal at the composition competition of the World Festival of Youth and Students in Moscow; two years later it was performed at the Prague Spring Festival. On May 27, Eino Tamberg, one of the most beloved Estonian composers will celebrate his 80th birthday.

The second half of the concert will feature the bright and idyllic Third Symphony by the greatest Finnish symphonist Jean Sibelius. 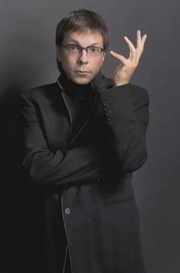